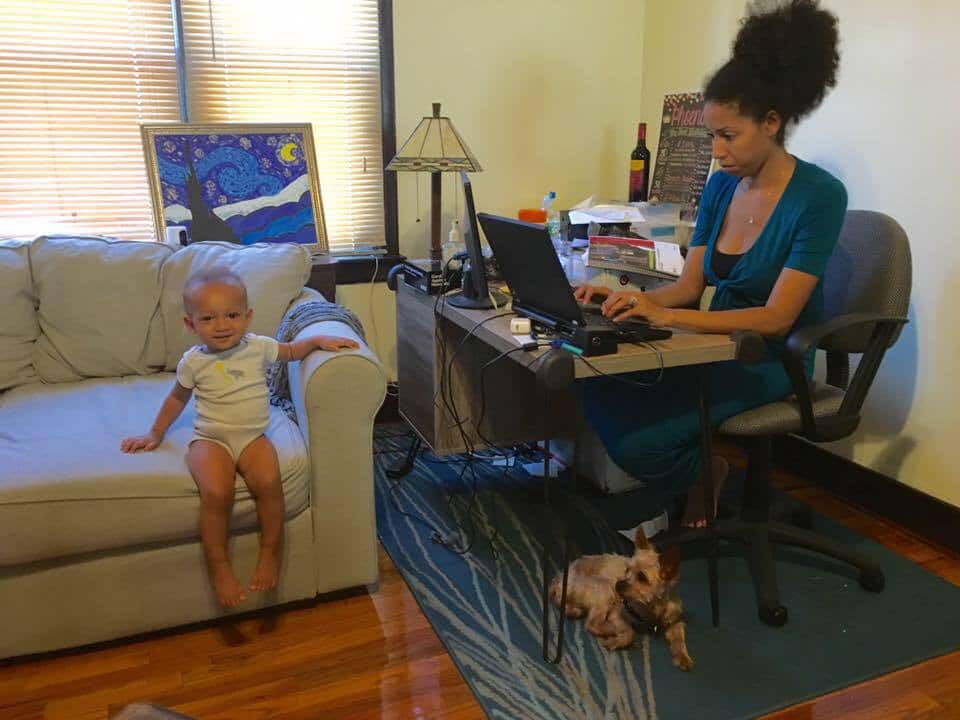 When I decided that I wanted to have children, I began looking to change careers. I worked in food service and I knew that there was no way that I was going to want to be on my feet nine to twelve hours a day while pregnant. As a bartender, I worked mostly at night clubs, and the hours I kept weren’t very conducive for child care. I watched so many of my coworkers have to give up their jobs, cut back on hours, or scramble to find childcare when they had to pick up shifts–and it seemed like they were always trying to pick up shifts to make extra money.

I didn’t want that. I wanted (what I thought would be) a cushy desk job. I wanted benefits. I wanted to be able to put a picture of my kids on my desk at work. I thought that if I focused on transitioning into administrative work, I would finally be in a track that I could stay in for a while and be set up to have a maternity leave plan that would take care of me and my family when I was ready.

My very first desk job was working at a receptionist for a government-contracted agency, and it was terrible. I remember having to get to work at 7:30 every morning and not leaving till 5:30, with only a 30 minute lunch break (which I often spent crying). I felt like I was under constant scrutiny because of the culture of micromanagement, and for the first time in my life I began having panic attacks. To top it all off, I had to ask for permission to go to the bathroom. This entailed me calling around to every other employee in the office to find somebody who was willing to sit at the front desk. Once they arrived to relieve me, the clock would start and I had to hurry back before people started to wonder why I was taking so long.

Unsurprisingly, I decided that that was also not the kind of job that I wanted to have. I didn’t want to be pregnant and have to run back-and-forth to the bathroom and deal with the challenges of pregnancy while conspicuously involving the entire office in my routine. Once I realized that I was actively not drinking water at work to avoid using the bathroom, I decided that this would also not be a good fit for motherhood.

My husband and I got married shortly after I left the job and decided that within two years we would start our family. Despite all my careful planning, when I got pregnant I actually wasn’t working much at all. Although I was teaching yoga and pilates classes on a very part-time basis,  I didn’t have a stable job or benefits. I had signed up for yoga teacher training with the intention of getting myself in the mental and physical shape to carry a pregnancy, but I wasn’t teaching enough classes to pay the bills. When it was time to go on maternity leave, I panicked and enrolled in school so that I could take out student loans, figuring that I would finance my own maternity leave until we figured something else out.

1. Tell everyone what you want.

I was clear before I had my daughter that I wanted to work from home–in fact, the day I went for my final hospital check-up I was on calls about doing at-home transcription work. I told everyone what I wanted and searched everything I could find for remote jobs. When my daughter was nine months old, a friend of a friend called and offered me a position that was perfect for me. I told them upfront that I wanted to work remotely, which they happily agreed to.

Almost every major breakthrough I’ve had has come from being referred for something to someone. They were always just a step or two outside of my comfort zone. I firmly believe that if you share what you want and work at what you’re passionate about, people will see your skills and fill in the gaps.

2. Learn how to negotiate.

I read a book that said in salary negotiations, you shouldn’t be the first person to offer a number. When my job called me to determine my salary, I waited for them to make the first move. They offered me more than I had ever been paid at any job before, with a guaranteed increase after three months. I was thrilled, and I stayed at that job, working mostly from home, for over a year.

I find parents are hustlers and doers. Our time is limited and so is our mental and emotional bandwidth, so we naturally tend to place a higher value on our time. Why? Because childcare is expensive and commuting is painful. Nothing like a screaming child waiting at home to make you maximize your “on” time.

3. Don’t be afraid to strike out on your own.

When my remote job laid me off, I was left adrift. I was writing and teaching yoga classes, but it wasn’t nearly enough to pay the bills. I’ll be real, I was on unemployment–and things were reallllll tight–for a long time. I even ended up taking a BS job I hated for some income.

I was planning to try to open a yoga studio, but the funding didn’t come together the way I’d hoped. I took steps forward though, filed my LLC, and launched my website. In marketing my business, I began developing and refining many important skills that were transferable to other endeavors. A friend referred me to her cousin based on my writing and web skills, and my (eighth? ninth?) career as a web developer was born.

You don’t have to have a five-year plan or even a five-month plan. Many parents feel, especially when their child is first born, like they’ll never find a way to work, care for a child, and nurture their own lives all at the same time. It doesn’t happen overnight, but it does happen. The important thing is to focus on taking the next right step, whatever that is.

I wasn’t sure what I wanted to do with my life. After participating in an intensive leadership training program, a friend told me that I’d be an excellent life coach. I loved the idea and began applying for coaching positions. In the meantime, I enrolled in school to finish my bachelors in psychology. That program opened up a lot of new directions for me, including a paid research fellowship.

I was afraid for a long time that once I had kids, my life would be over. I was so wrong. I became more myself after I had my daughter. I was more confident, more focused, and I definitely made more money. Labor, delivery, and learning to provide for my growing family taught me my worth and showed me how capable I was under fire. A huge part of that was that after you have kids, you just give less fucks. I was like “Listen, I’m not leaving my kids for less than X amount of money.” Nuff said.

I work for myself, so I try to be a good employer and never undercut myself by going backwards on my pricing. You will be involved in a lot of things with your children, so market your skills by sharing authentically with people wherever you go. People love to work with those that they have a personal relationship with.

I made more money after I had kids largely because I had a greater sense of my self-worth. I had skills that I knew were marketable and I wasn’t afraid to put myself out there. I managed my time better because I had to be very creative about getting stuff done. When you first have your baby, there’s a sense that your life is getting very small. That’s normal as you adjust to your new responsibilities and you struggle to balance everything. However, at a certain point in your life, you’ll be done having babies, and then you’ll be staring ahead to the rest of your life. You get to continue forward as a person–not just as a mother (although that’s a big deal) but as an entire well-rounded human being who’s going to keep learning new things, and for whom motherhood is just one aspect of life.