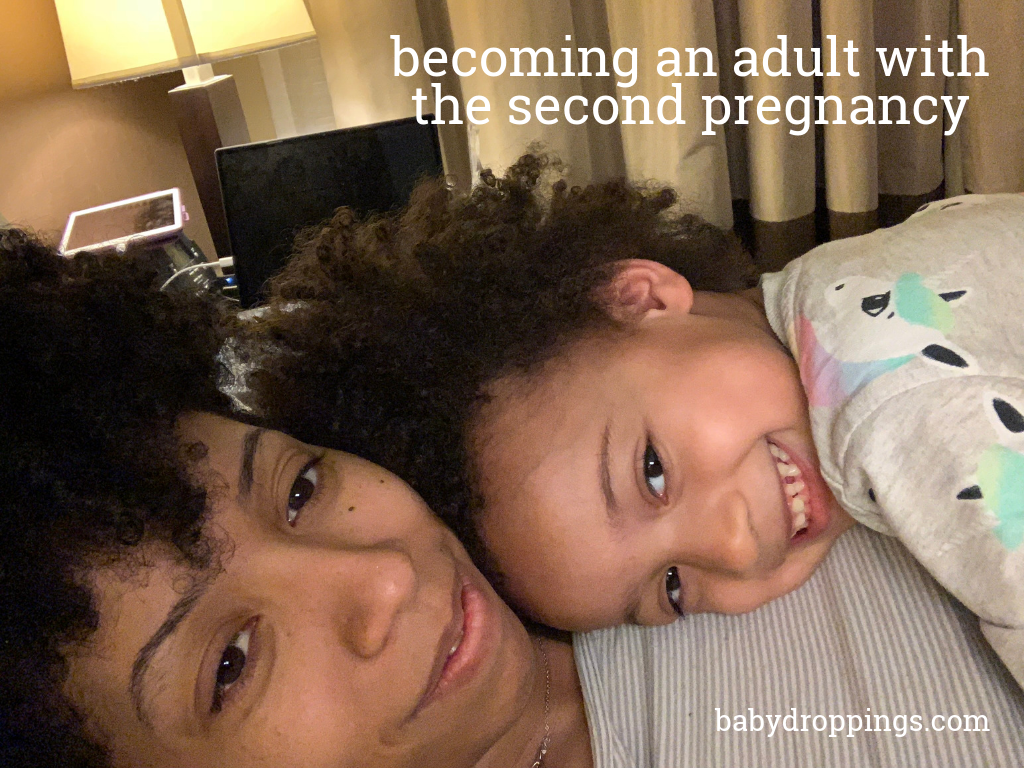 I don’t know if it’s that I’m weeks away from my thirtieth birthday, or that I’m heavily pregnant with my second child, but I feel my adulthood keenly. When I was 25 years old and expecting my daughter, I felt like I was stepping into this new and exciting phase of my life. This time around, I feel settled, tired, and a bit sore. Or, to quote Bilbo Baggins: “thin, sort of stretched—like butter scraped over too much bread.”

I have done a tremendous amount of growing in the last five years. When I was pregnant with Phoenix, everything after my due date seemed like one big giant blank. I had no idea what to expect or how life would be in my new role. This time around, the months after I give birth are already filled with plans, appointments, expectations and birthdays. I have to try to protect that precious time where the baby will be tiny and new, because so much of this has become second nature. Less scary, and somehow, less sacred.

I looked forward to this pregnancy so much—planning, agonizing, anticipating, seeing my friends bring home new little babies and eagerly awaiting the day that Damany and I would be able to announce our new arrival. Instead, the last thirty weeks—and in fact, the last thirty years—have gone by in a blur. There was no huge reveal, no Pinterest-gender-party, no baby sprinkle at a posh location. As it stands, I don’t even have plans to celebrate my birthday. Part of that makes me really, really sad, and it’s not because I don’t love my life. It’s because I’m mourning the woman that I thought I would be at thirty.

With every milestone that passes, there is a mystery in your life that has been solved—a door that’s been closed and is just a little less sparkly. At one point, I didn’t know what my wedding dress would look like, or my engagement ring, or my spouse. I didn’t know if I’d have a boy or a girl or any kids at all. I didn’t (and I still don’t) know what I want to be when I grow up. And despite feeling more and more like I have less and less worked out, I’ve had to take care of myself in ways I hadn’t imagined five years ago.

If I could, I would go back and tell my 25-year old self “You ain’t grown.” It’s not that I was ever irresponsible or immature—I have just had to be tough in ways that I didn’t imagine before. Being pregnant was one thing–being pregnant while having to take care of a three-year-old is a whole nother game entirely. Again, I don’t know if it’s being pregnant or turning thirty that has me so introspective, but I’ve developed in so many ways that I couldn’t have foreseen at 25. I’m still tough on myself, but I’m compassionate with myself too. I push myself incredibly hard, and then I’m understanding when I’m overwhelmed by the work ahead of me. The doubt is still there, but I don’t accept it as truth anymore. I let it in, I let it do its thing, and then I’m back to work.

The fact is, I’ve grown into a woman and a mother in the last few years, and I am my own version of woman and motherhood, stepping into my true self the way that one would ease into a bath that’s just a little too hot. Sometimes, I’m a little sad that I don’t have the wide-eyed mysticism that I had when I was younger. There’s a distinct lack of magic and pampering in this pregnancy. But in its place, I have confidence, self-assuredness, and something growing inside of me that looks like wisdom. And I can’t wait to see what the next ten years look like.