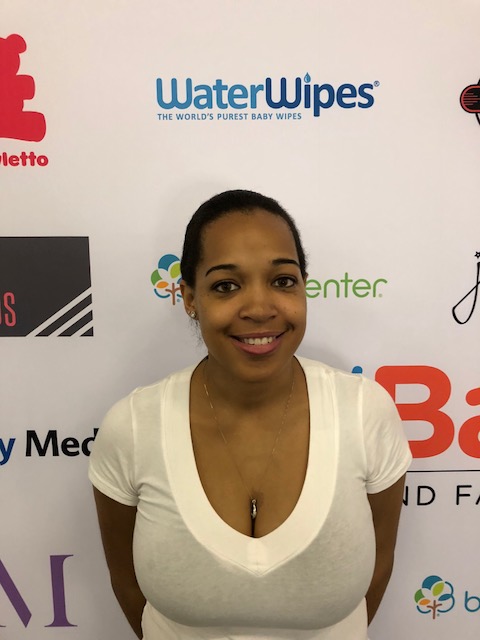 Okay, okay. I don’t exactly have a baby anymore–Phoenix is walking, talking and even potty training! That’s why I reached out to my friend Whitney and her lovely family to stop by the New York Baby Show. They’re perfectly adorable and were in the market for all the latest and greatest baby must-haves for their eight-month-old daughter.

Buyer’s remorse? It happens to the best of us, especially for new parents. You have that rabbit hole of the internet, your parents, your friends and even strangers giving you advice on how to raise your child. As a first time mom, I usually second guess if I have bought the right car seat, if there’s a better way to get her to sleep or if the food my baby is eating is the healthiest. This year’s New York Baby Show was the best place to get the scoop on the in’s and out’s of baby gear.

Right after I gave birth, my nurse introduced me to the swaddle. It seemed it was an instant sleeping pill to my baby that ended becoming an essential tool in providing comfort and stability in her sleeping schedule. Unfortunately, as she got older, swaddles started to be lose their effectiveness. She became more cognizant of her lack of mobility, and developed the ability to eventually break out of multiple variations of wraps. At the NYBS, I stumbled upon a company called Love To Dream. Their company manufactured apparel customized to recreate the positive attributes of swaddling while stripping away the negatives that hinder its effectiveness. 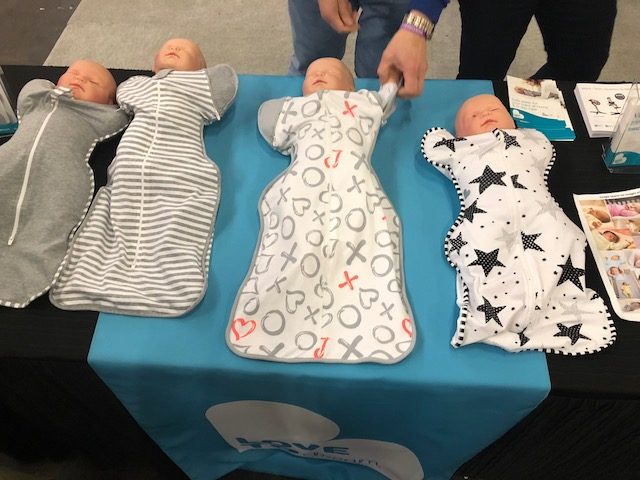 Their “Swaddle Up Swaddlers” were created to help the baby fall asleep with their arms up rather than pressed upon their bodies, eliminating the trapped feeling that makes babies and toddlers uncomfortable. The added touch is the removable wings on the arms that allow for the baby or toddler to either touch their face or do whatever self-soothing technique they need to do to help them either get to sleep or stay asleep. 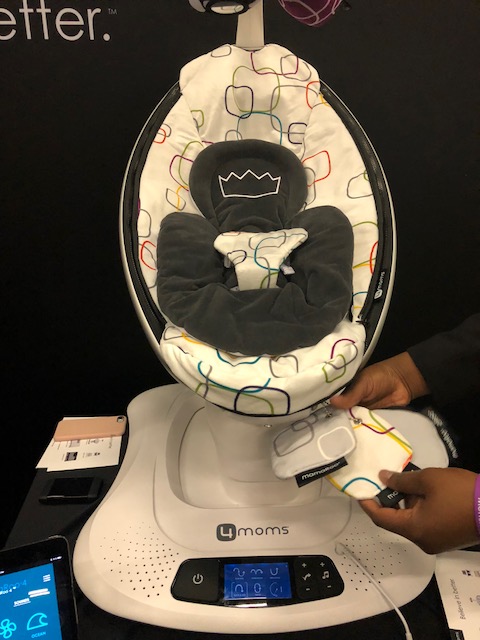 Speaking of sleep, automatic rockers are a mother’s dream.  Sometimes, newborns just want to be rocked, and it can be mentally and physically taxing to do so for extended periods of time.  Being an owner of an older model of mamaRoo, I was excited to see 4moms at the expo displaying their newest model of their bouncer/swing. The mamaRoo4 has a new Bluetooth feature where you can control the five unique motions and speeds, sound and volume from your smart device without disturbing your baby. Talk about amazing! They also featured their highchairs and pack’n’plays, which had an awesome one-push open and close feature. 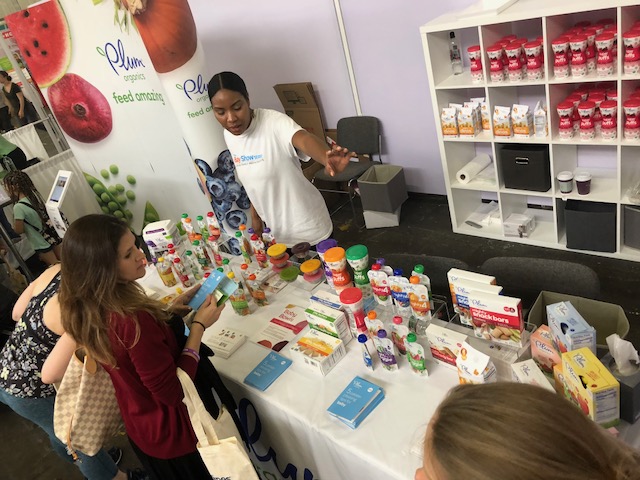 I have always wanted to prepare my own baby’s food, and I must admit, although it was rewarding at first it can become difficult when you’re trying to balance work, family, and time for yourself. I’ve found it extremely helpful to have a few snacks and easily prepared foods handy that my little crawler not only loves, but also helps her develop her pincer grasp. Finding a snack the she enjoyed was trial and error, so it was a real relief when we finally came upon an organic food brand called Plum Organics. Their line of Organic Fruit and Vegetable Puree Pouches, Flavored Puffed Snacks and various snack bars helped fuse fun time with snack time. With their easy prep and fun shapes, I’ve found occupying my little one’s time for just a few moments a little bit easier (which is really all we can ask for!) 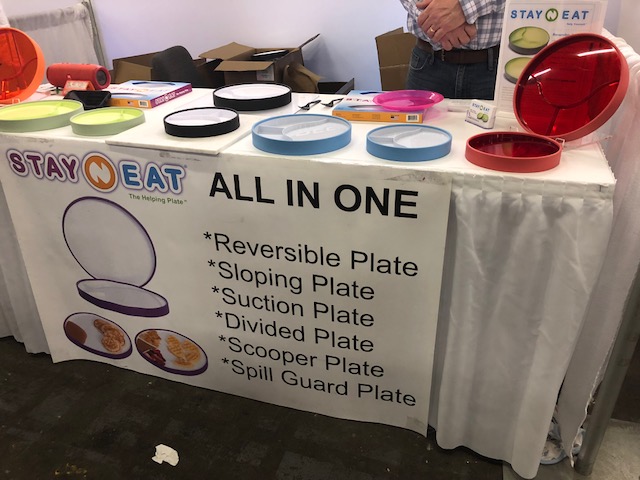 Most parents dread meal time for various reasons but an extremely common reason is when your child picks up the bowl and tosses the food on themselves and everything else in the splash zone. I’m so grateful to the good people over at Stay n’ Eat. They have helped to revolutionize feeding time with their “All in One” plate! Their flagship plate is “slip-, tip- and flip- resistant” while featuring a reversible design with a sloped surface side to reduce food from getting soggy. It is also designed for self-feeding with its “e-z load sidewall” and that same border helps reduce messes. Definitely a must for messy eaters! 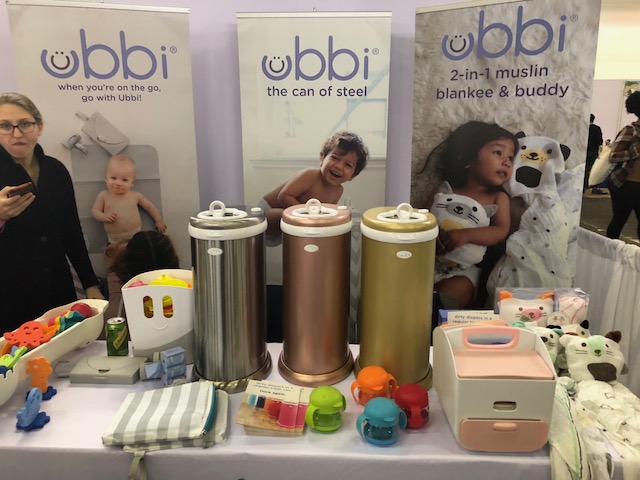 What comes in must come out, and dealing with the latter isn’t always enjoyable (to put it lightly). While walking the aisles of the New York Baby Show I saw many different variations of very popular diaper pails, so I was curious to see what kind of advancements had been made to this baby necessity. Ubbi’s colorful and sleek pails would match any nursery design, with their full range of different stainless steel colors. They provided the basic functionality of the diaper disposals that I was already familiar with, but I was looking for something truly different. 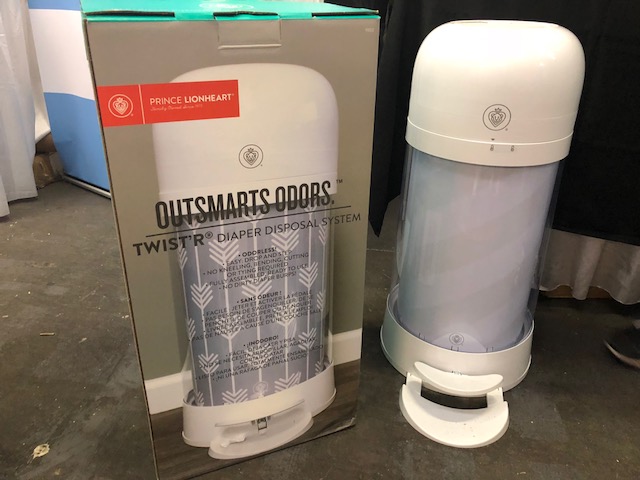 That is where a family owned company Prince Lionheart comes in to play. Their all new Twist’R Diaper Disposal System has a fresh take on a classic nursery item. Their easy Drop and Step diaper process makes it so you don’t have to bend, kneel, cut or tie anything. The extremely helpful Ambassador showed us how easy it was to simply drop the diaper into the top opening that auto shuts, sealing in smells before they can escape. Then all you do is step on the pedal in the front of the pail to activate a turning mechanism that seals each diaper at the bottom of the bag. It holds 35 diapers with an easily detachable bag that you simply pop out of its slot and replace by popping another one in. The bags themselves are self-tying, which I found refreshing, as touching soiled diaper residue is not high on my want-to-do list. 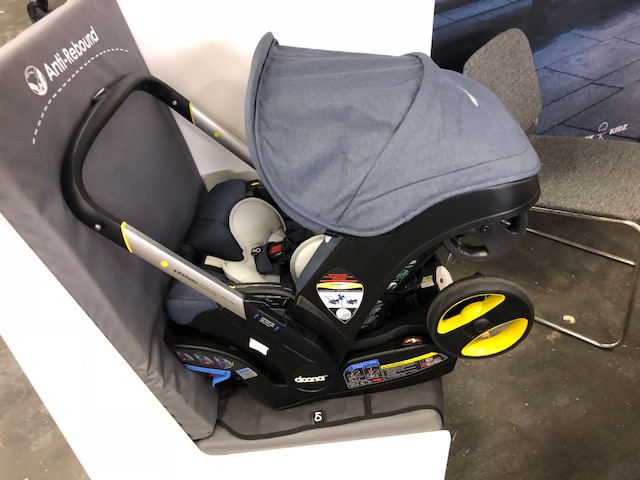 One of the biggest areas of the NYBS was its travel and safety exhibits and of course there was a plethora of strollers on display. I personally enjoy the Doona Brand Strollers, seeing as they are the most functionally logical “all-in-one’s” I have ever seen or experienced.  Seeing as most hospitals require a car seat in order to take a newborn child home, this Doona was a godsend in its ability to be small and light enough to be carried in traditional car seat fashion, while seamlessly and easily transforming into a fully functional stroller.  I was excited to see they were at the NYBS, so I visited their booth when it was less crowded. The Doona is best for families “on the go” and is definitely a fully integrated mobility solution. There was even a big test track that simulated real life obstacles like street grate, gravel and bumps, which of course the Doona passed with flying colors! Many other ways of transporting your little one were available as well but the Moby Fit Baby Carrier caught my eye. 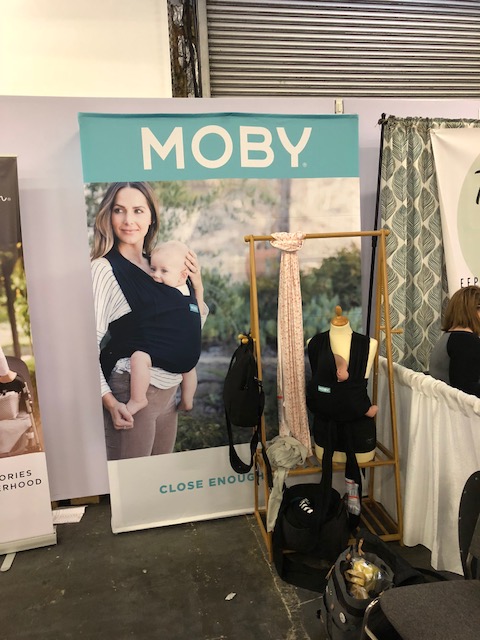 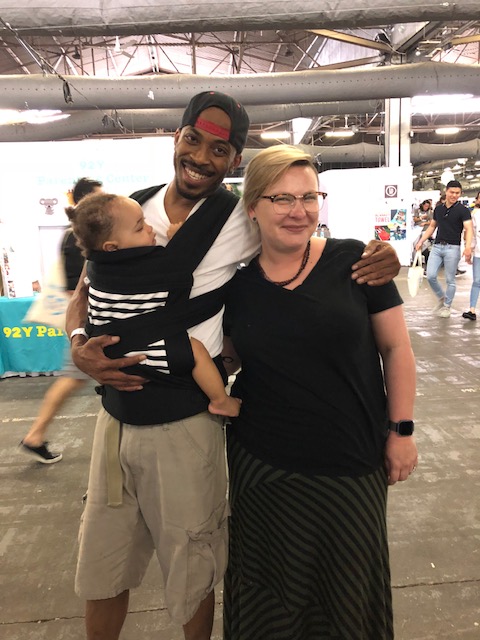 Moby is a pretty well known company, known for their baby wraps and carriers. The coolest thing Moby had on display this year was their brand new, customer inspired, Moby Fit.  This carrier was special in a way that it fused the classic Moby wraps with modern ordinary carriers that most people are accustomed to seeing.  The large padding at the base of the carrier acts as a very comfortable brace for the weight of the little one and makes it a lot easier to take longer trips. This was definitely my choice for most improved product of the whole afternoon, seeing as they took their customers feedback and flawlessly showed it in their latest product.

This year’s New York Baby Show was a definite hit! It offered you the chance to explore hundreds of top brands and new innovative products for your baby’s needs. There were also classes and seminars with top advisors in their respective fields with opportunities to interact with them to gain clarity on a variety of issues. They were extremely successful in creating an atmosphere that would be comfortable for families with everything from Mom and Dad Lounges to Family Photo Op Stations and the 40 Foot RV Pumpspotting Pump Suite. Oh, and I can’t forget to mention the vendor’s promotional raffles and giveaways–definitely the cherry on top!

Well, somebody’s happy about the ban on plastic

When you are just too cute for anyone to handle. .